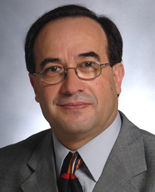 Pol Spanos (Coordinator of PLENOSE unit at Rice) research efforts focus on the dynamics and vibrations of structural and mechanical systems under a variety of loads. Systems exhibiting nonlinear behavior and/or exposed to hazard/risk inducing conditions receive particular attention. His group is also interested in fatigue and fracture issues of modern composite materials, and in signal processing algorithms for dynamic effects in biomedical applications. Professor Spanos develops primarily analytic and numerical methods that often require advanced scientific computation packages and supercomputers. The mathematical models used involve deterministic and stochastic differential/difference equations that are often incorporated in finite element and other numerical codes, and in many design procedures. Also, Monte Carlo random simulation approaches are developed/used along with advanced techniques for signal processing and safety assessment involving digital filters and wavelets/chirplets transforms. Solution techniques developed by Professor Spanos are applied to diverse themes such as vehicle and robot dynamics; estimation of seismic spectra; flow-induced vibrations of offshore rigs, marine risers, and pipelines; certification of payloads in space shuttle/station missions; directional oil well drilling; vibration and aseismic protection of structures and equipment; wind loads simulation; and signal processing for electrocardiograms, electroencephalograms, and bone mechanics. Professor Spanos received a National Science Foundation (NSF) Presidential Young Investigator Award for research in earthquake engineering. He is also a Pi Tau Sigma and a Larson medalist from the American Society of Mechanical Engineers (ASME) for outstanding achievement in mechanical engineering within ten and twenty years from college graduation, a Huber Prize recipient for outstanding research from the American Society of Civil Engineers (ASCE), an A. M. Freudenthal Medalist from ASCE for lifetime contributions to probabilistic mechanics and reliability analysis, and a Newmark Medalist from ASCE for his contributions to the theory and applications of dynamics and vibrations. He has received the Research Award for Senior Scientists from the Humboldt Foundation in Germany for his contributions to Engineering Mechanics; and the Stochastic Dynamics Research Prize from the International Association for Structural Safety and Reliability (IASSAR). He has served as an ASME Distinguished Lecturer for the period 1997-2003 with worldwide lecturing engagements. He is the 2003 Theodore Von Karman medalist from ASCE for lifetime contributions to engineering mechanics. He has published more than 300 technical papers and has authored/edited 18 books and conference volumes. He serves on the editorial boards of many journals and he is the Editor-in-Chief of the International Journal of Non-Linear Mechanics (launched in 1965) and the Managing Co-Editor of the Journal of Probabilistic Engineering Mechanics (launched in 1985).